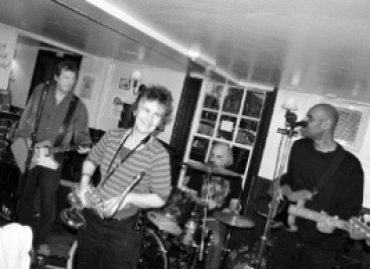 Kim plays guitar and sings with Out Of The Blue.

Previously he was bass player in the original Sutherland Brothers band who, apart from writing “Sailing” (the colossal world-wide Number One hit for Rod Stewart) had several of their own hits, including “Arms of Mary” (another Number One), “I Don’t Wanna Love You (But You Got Me Anyway) ” and has been a session player at Island Records’ Studios, the BBC, the Albert Hall etc., and has led a variety of bands ranging in style from out-and-out pop to Frank Zappa and free-form music. He has built and run his own studios and in addition to fronting Out Of The Blue he is currently playing and still available for recording sessions mainly in London, on bass, guitar, and vocals.

For past work on guitar see the ‘5 solos – guitar, sax and flute’ in the video section ( more guitar solos soon ) – turn it up !

For past work on bass you could listen to ‘The Sutherland Brothers Band’ on cd – available on amazon etc, and see ‘videos’ on Youtube of “I was in Chains”, “The Pie”, “Wars of the Roses”, “Where in the World”, “Hallelujah”, ” Long Long Day”, “Midnight Avenue”, and “Big Brother” ( Turn ’em up ! )”